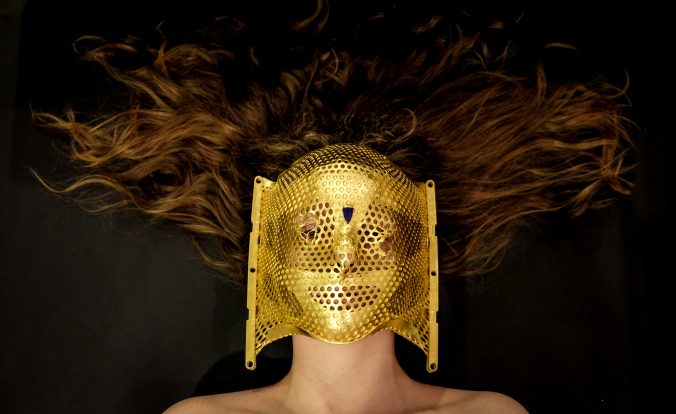 At 24 years old, Siobhan Hebron did not expect the migraines she had been experiencing for a week in the summer of 2014 to be anything more than a fluke. Instead, an MRI revealed the actual cause—a tumor, which was obstructing the flow of cerebrospinal fluid in her brain and causing the headaches.

“This project has been brewing for a while, but it really started to form around the centerfold piece, ‘CANCER.’ As that piece started to come together along with the thoughts that now form the essay ‘Our Great Analogy,’ the larger project became clearer.

I knew I wanted to commemorate my 5-year anniversary in some way. Besides the fact that ‘cancerversaries’ in general are meaningful, for so many cancers the 5-year survival rate is a significant marker. Additionally, 5 has been a particularly symbolic number within cancer for me as my chemo cycles were administered in days of 5. Thus each of my series of images alongside the particular cycle was also done in a series of 5.

I wanted to take this particular anniversary to think about cancer. Generally, specifically, aggressively, casually, and from every perspective and facet that I had access to. I’ve spent most of the time since my diagnosis participating more in a space of generalized illness, but for this anniversary I really wanted to narrow my focus.

The resulting collection of works is filled with personal reflections on my own experience, as well as reflections on cancer at large. There are essays that have been thought about for hours and researched and edited, but there are also fractured and fragmented bursts of thought that I jotted down in my phone. I want this inconsistency available to the reader. It’s been a learning experience and I want that ‘messy-ness’ of the process to come through.

I’m hopeful that what has been my own unique version of cancer, during this specific moment in history, can be useful or helpful to not only other patients, but also caregivers, doctors and nurses, medical students, and anyone who comes into contact with cancer.”

An Excerpt from FIVE YEARS: A Collection of Written Works by a Sick Womxn, “Tolerating the Abled”

I do not want to be around healthy people.

This was the first thought that came to mind when I was asked to join a group at a bar. These were not particularly close friends; in fact I would have only known one or two people. I knew how the conversation would go and it was not one I wanted to have. I did not want to see others around my age with lives and priorities so far from my own, at least not that night. This instance made me realize the isolation I felt as a sick person among my peers. I allowed that isolation to radiate out and recognized with stark clarity, the degree to which sick and disabled people exist as one of the least visible groups.

This came on the heels of two similar instances. One being a friend filling up their social media feed with posts and images by and about sick and disabled people, and stating that it made them feel more positive, more accepted and more confident. Not soon after, at the memorial service of a friend’s friend who had had muscular dystrophy, it was said that “it must take a lot to tolerate the abled.”

These three instances struck such a chord within me about the unacknowledged isolation of sick and disabled people within a world of healthy, able-bodied people. I found myself devastated at the idea of how invisible, yet prevalent we are; how unsupported we are by the world around us. And how people forget that we are living dis-abled in an able bodied world.

The recent documentary Unrest opens with Jennifer Brea’s husband saying that “one has to be careful, if you say too little they can’t help you, and if you say too much they think you’re a kind of mental patient.” I found this statement made a profound point about the power structure that exists in regards to health. It exposes the fact that those without the privilege of health are constantly re-calibrating how to navigate that power structure. There is a conscious and constant performance of health we put on while in the world. And I imagine this performativity of self translates for most people in the disadvantaged position of systemic hierarchies, whether it be race, gender, sexuality, etc. If not for actual physical safety, then for emotional security, for a sense of belonging.

And while I don’t think it is as simple as a single factor, I do think it is as simple as the fact that people feel more comfortable around people like them. And this feels all the more pertinent in our current culture of increasing divisiveness. So while the last thing that I want to do is enforce bias or discrimination, we need to acknowledge a feeling of comfort and community when one is with similar people, and that that is neglected when it comes to sick and disabled people.

More and more, I feel unable to join any space or conversation without bringing up the topic of my health. And it does not come from a desire to monopolize the conversation or even that I constantly want to talk about it; it’s just increasingly impossible to engage in any topic without acknowledging how it has in some way been affected by my diagnosis. Politics, employment, dating, hobbies: there is no area it hasn’t affected. It is my life now.

So, while I am open about my cancer and proactively fill my life with other sick and disabled people, the majority of spaces I have to exist in are still mostly unable to acknowledge and unreceptive to anything other than the default able-body. But as a sick, young adult, it is simply hard to engage with people unaffected by health concerns. I don’t feel as though I should have to defend that position. I believe in the radical possibilities of the sick body, and I am proud to inhabit that body and fight for its value and validity.

(This excerpt was previously published in The Mighty and FIVE YEARS.)

Siobhan Hebron is an interdisciplinary artist living and working in Los Angeles. She graduated from UCLA in 2012 with a B.A. in both Art and Art History. Starting in 2014, Hebron’s work takes on her personal experience with cancer and broader dialogues of illness, chronic conditions, disability and ableism, and the sick female body. Her visual work engages in feminist social practice, directly embracing community and collaboration. Her writing explores these same topics and functions within the idea that a radically honest dialogue is needed to change the socio-cultural norms around health and illness. Hebron plans to continue exploring and making work about illness and hopes to further the conversation between the artistic and medical communities through a creative criticality.

Her most recent project was a compilation of her own work over the last five years, released on the five year anniversary of her cancer diagnosis. A digital version of FIVE YEARS: A Collection of Written Works by a Sick Womxn is available for download.

“the spider” by Rebecca Kokitus