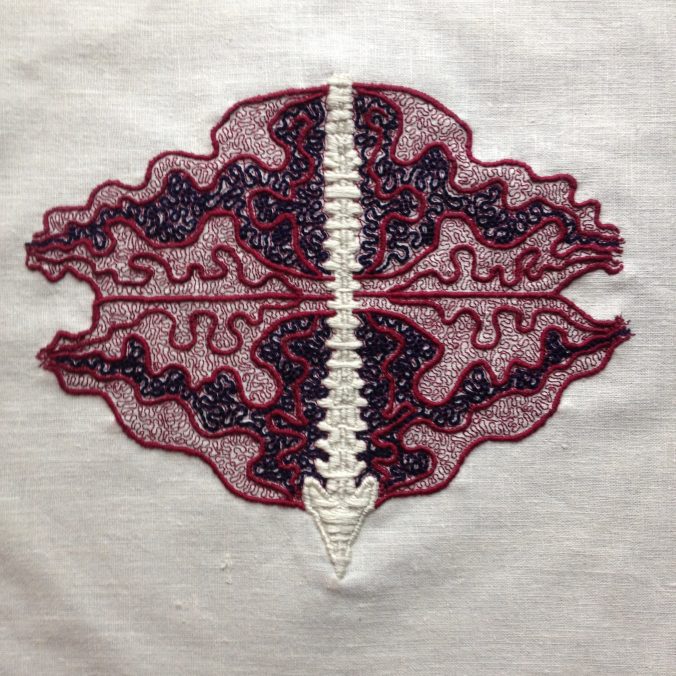 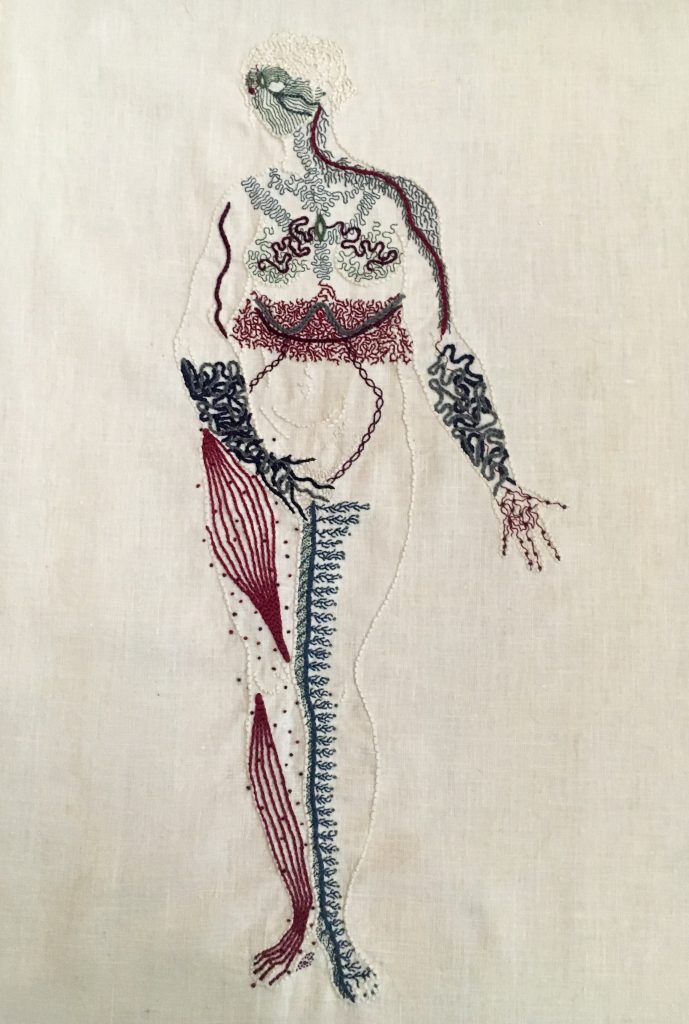 (An outline of a naked woman is embroidered on linen in the same bone white colour as the linen. She stands legs together, her right hand covering her groin, her left hand palm up, extended slightly to her side. She looks to the right. Her body is covered in squiggles, dots, and lines in blues, burgundies, greens, and greys. Some of the markings are done in thick stitches, some in thin lines. Her belly is clear of markings. Her face is a mask of green lines, feathery lines cover her shoulders and chest. There is a thick band of intricate burgundy stitching around her waist. Her forearms and hands are covered in thick undulant lines. Her right leg has bands of burgundy along the muscles, with small dots around them. Her inner left leg has a thick line of blue running up it, with thin branches spreading towards her outer leg.) 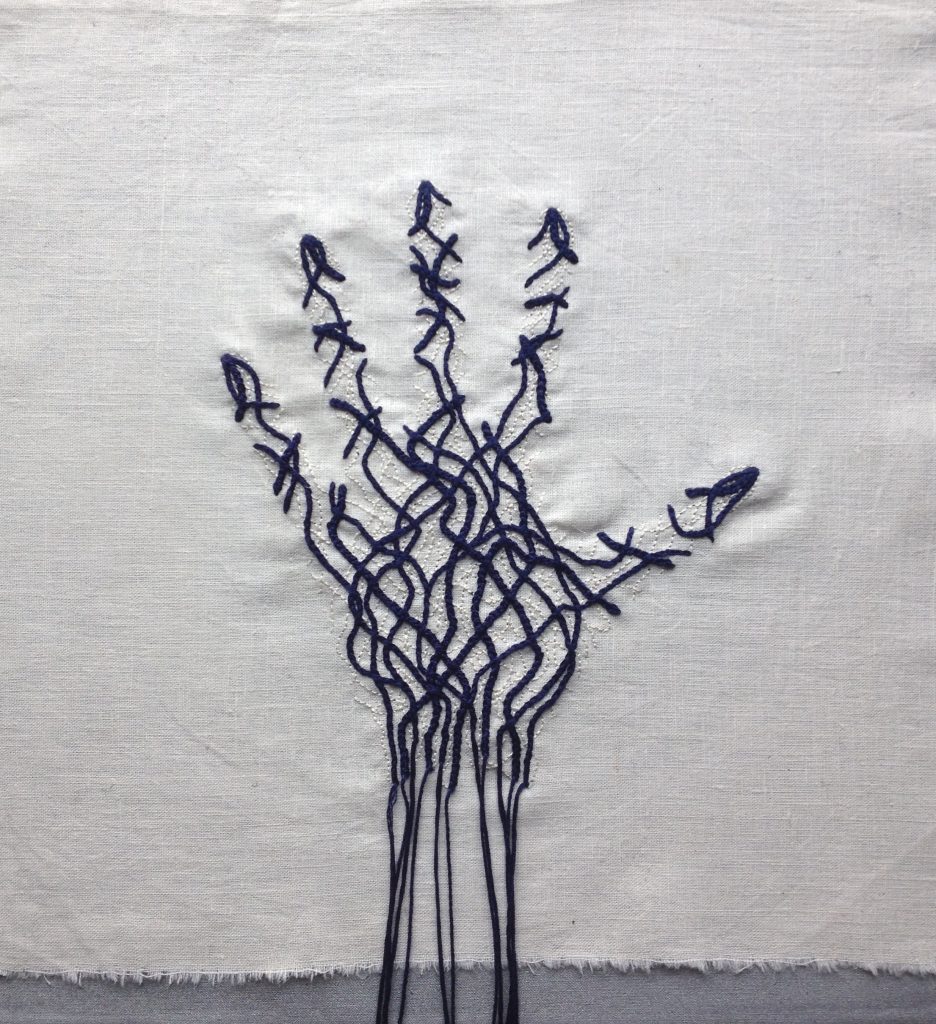 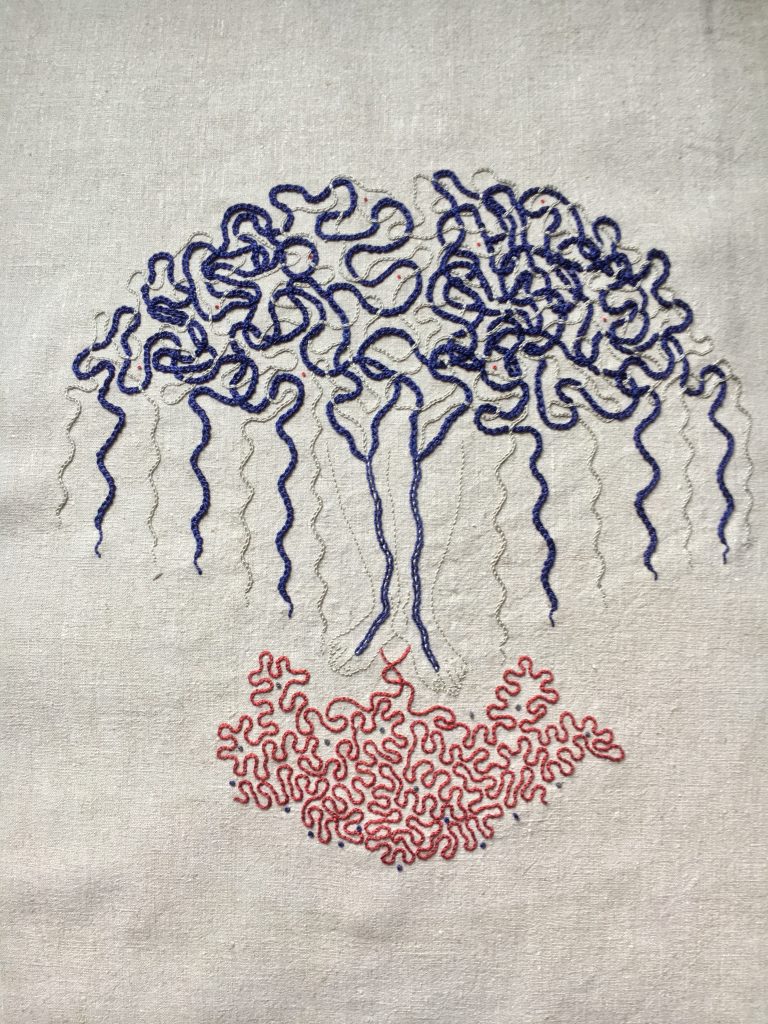 (On a pale natural linen, there is the pale outline of a woman’s lower legs and feet, heels together, toes apart. From the soles of the feet, thick red/orange lines coil beneath. From the big toes moving upwards, thick blue and off-white lines rise up through the inner calves and branch off at the knees. These lines coil and intertwine in a brain-like shape, and then move back down in wavy lines like a wide skirt around the ankles.) 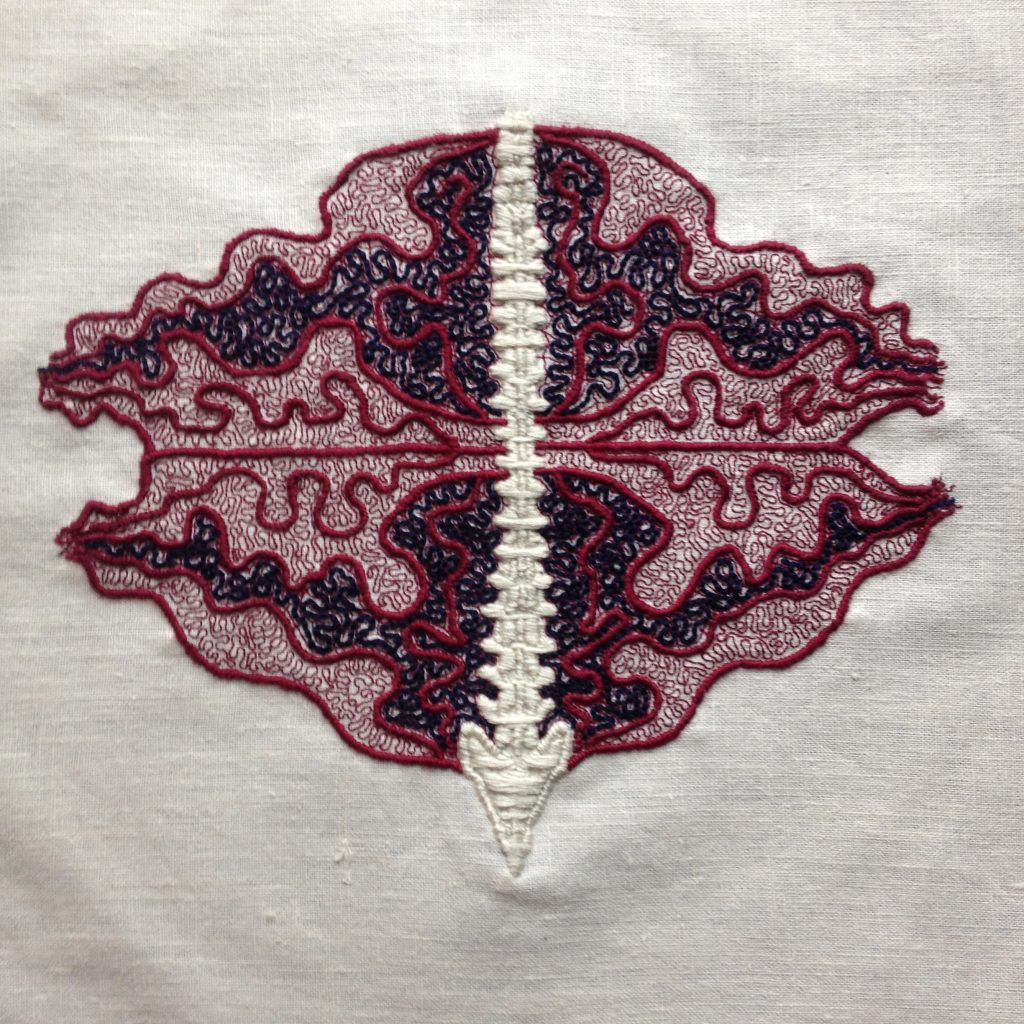 (In the centre of some bone white linen, there is a spine embroidered in a thick satin stitch. Emanating from the spine are thick burgundy lines in an undulant oval shape. This oval is bisected across the middle. In the top half, there is a section outlined in burgundy filled with coiling blue lines and a similar section in the bottom half. The rest of the undulant oval is filled with fine coiling burgundy lines. The spine is very straight, the rest of the embroidery is very coiled and busy. ) 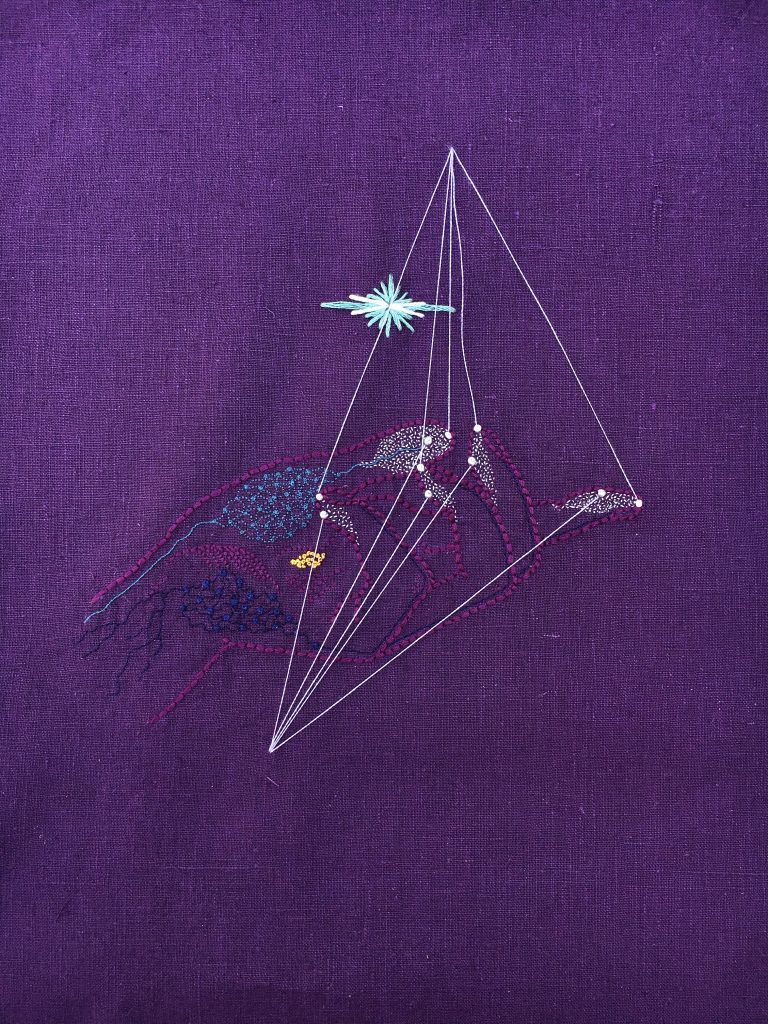 (On a deep purple linen there is the outline of a left hand in a slightly lighter purple. The hand is palm up, fingers slightly curled inward except for the pointer finger which is straight. On the pads of the tips of all the fingers and thumb are miniscule white dots. On the tips of the fingers and in the centre of these pads are white knots. These knots are connected to two triangles in lines of white thread, the peak of one directly above the tip of the thumb, and the other peak below the palm. On the left edge of the top triangle is a star shape in light blues and whites. In the centre of the palm is a grouping of tiny golden yellow knots. On the palmar pad of the thumb are tiny light blue knots connected by small stitches in a map-like design. Leading out from the pinky is a similar map-like design in navy blue. Between the two blue map-like designs is an area of tiny purple knots.)

I am a multidisciplinary artist who works in text, music, sound, and image. Until 2015, most of my work was performative and incorporated music, video, and movement. In 2015, I became ill with ME/CFS (Myalgic Encephalomyelitis/Chronic Fatigue Syndrome) and was unable to move much at all. I was also so sensitive to sound and vibration that even listening to music was painful. Reading was confusing, and writing extremely depleting. While watching a period drama, one of the women characters was told to “take to her bed and work on her embroidery,” and I thought, “I have taken to my bed. Why not do some embroidery?” My mom had some embroidery materials, brought them over, and I was smitten with the process. ME/CFS demands rest and calm. Embroidery is a slow art and something I find very restorative.

My initial subject matter when I started embroidering was some of the text/image pieces I had created before my illness based on old anatomical illustrations. It was through these pieces that I honed my craft in hours spent reclining with needle, thread, and hoop in hands. Then one day during a meditation session I began to see all my neurological symptoms: pain, tingling, and twitches, as lines of stitching on cloth. It is at this point I began to illustrate my invisible ME/CFS symptoms and have named this series “symptomatology.” I embroider primarily with cotton thread on linen but have also started experimenting with silk thread recently. For my symptomatology pieces, I start with the shape of my body or whatever body part I am focusing on. I use old anatomy illustrations or photographs of myself as a guide and then meditate on what I am feeling in the moment, stitching the sensations freehand in the moment.

Lia Pas is a Canadian interdisciplinary creator who makes work as text, sound, movement, and image. Since becoming ill with ME/CFS in 2015, Lia has focused primarily on textile-based work exploring anatomy and symptomatology. An essay on her current creative process is forthcoming in the In Copore Sano anthology (The Operating System, 2019). Her poetry has been published in numerous literary journals as well as in her book what is this place we have come to (Thistledown Press, 2003) and her chapbooks vicissitudes (Underwhich Editions, 2001) and Husk (JackPine Press, 2008). Her videopoem about the heart—susurrations (2009)—can be found on Vimeo. Lia’s music has been performed by chamber ensembles, used as soundtracks for short films, and broadcast on CBC and BBC radio. She has worked extensively with movement artists and was composer/librettist for Fihi ma Fihi (2015), a full-length dance-rock-opera with La Caravan Dance Theatre. She can be found online at liapas.com, on Instagram and on Twitter.