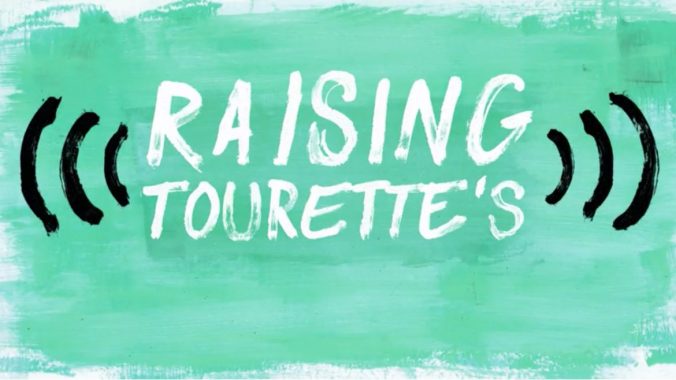 While scrolling through options to watch On Demand, I noticed a show I had never seen before pop up on the screen. It was the recently premiered six-part docuseries on A&E called “Raising Tourettes.” The show follows the lives of kids and teens with Tourette’s Syndrome and the people in their lives.

Tourette’s Syndrome is a neurodevelopmental disorder that is classified by the presence of both motor and vocal “tics,” or uncontrollable mannerisms. There are also comorbid (co-occurring) conditions that can also be associated with Tourette’s such as anxiety, ADHD, OCD, and more. It is a condition that someone is born with but manifests during late childhood through the preteen stage. I’ve recently had an uptick (pun intended) interest in media related to disabilities, primarily Tourette’s. Why? Because after many years of wondering exactly why I was different, my suspicions were reaffirmed when I was finally diagnosed with Tourette’s as an adult at 22 years old.

Here is a quick recap of my life leading up to that point:

At 8 years old, I participated in a church Christmas play as an angel. My role was simple: stand still and smile at the audience. Instead, I kept stretching my neck out like a giraffe reaching for a leaf at the top of a tree. No matter how I tried to stop it, nothing would work.

My concerned parents called the pediatrician’s office for their first available appointment. They were dismissed, saying they were “overreacting.” The second time I went, I was finally referred to a pediatric neurologist, who confirmed that I had nervous tics that would probably go away with age. But instead of disappearing, it just manifested as more tics. Repetitive blinking, head nodding, sniffling, leg shaking, and foot twitching were just some of the tics that waxed and waned throughout my childhood and teen years, some persisting to this day. I also developed anxiety and panic disorder that made it difficult to do new things or to travel.

No doctor, not even the pediatric neurologist, had ever made the connection to my other conditions and my tics as being Tourette’s. It was often dismissed with medication and a follow-up appointment the following year to half-heartedly mention that it could or could not get better or that I just needed to stop watching TV. I eventually stopped going to fruitless neurology appointments and tried facing my mystery condition in secret.

I did a halfway decent job of hiding it, too. I sang in choirs, played several instruments, got good grades, and hung out with my close group of friends. But in stressful situations when my tics and anxiety got worse, I couldn’t hide it. People would ask what was wrong with me or what was going on, but I would deny that the tics even happened. I hoped that by pretending they didn’t exist, my problem would go away. Instead, it made them worse. I would sit in discomfort at concerts, school events, or crowded venues with loud noise and a plethora of people and tried to suppress the tics that were building up in my body. I would make excuses as to why I couldn’t go out and do things other kids and teens found fun. When I would try to get over my symptoms, it wouldn’t work. Not only would I feel frustrated, I felt like a freak. I never thought anyone could understand what I was going through, some sort of medical anomaly.

When old childhood tics and problems resurfaced during college, it was my boyfriend who suggested that I could have Tourette’s. The more I researched about the condition, the more my life started to make sense. The way my anxiety and tics faded in and out of my life, why I suddenly felt the need to have a giraffe-neck at eight, why I always felt out of place. Every day, I am becoming more and more comfortable embracing Tourette’s as a large part of who I am as a person.

Though I was excited to see the show, I was still hesitant to watch it. I’ve often read books or seen movies or shows portraying people with disabilities get overshadowed by the “martyr-parent,” where the focus is completely on the hardships of a parental figure or the “normal” sibling over the person with a disability. It emphasizes people like me as a burden rather than just being a person with different abilities. While addressing the feelings and hardships of caregivers is an important aspect of our narrative, it isn’t the one that should be getting the most attention. Even so, I took a risk and began watching the show.

There are several kids of different ages and genders on the show. All have Tourette’s that presents itself in a different way, but openly acknowledges the fluidity of the condition. The first episode focuses on Kristin (17), Charlee (13), and Kaden (11). The kids are visibly comfortable with their parents and their parents in turn have a lot of understanding for what their kids are going through. Kaden’s mom reveals very early in the show that she also has Tourette’s and coaches and supports him. Kristin’s mom suffers from anxiety issues that make her relatable to her daughter. Charlee’s parents, though visibly concerned and frustrated with how the hormonal changes affect her Tourette’s, express support for their teenage daughter. All of their parents encourage their kids to be open about their Tourette’s while encouraging them to find other parts of their identities outside of Tourette’s.

Not only was I pleasantly surprised by the show, I felt validated and heard through every kid that shared their story. Though the show’s title seemed to imply that it would focus on the hardships of raising a child with Tourette’s, the perspectives of the kids are front and center. It also addresses that Tourette’s is commonly stereotyped as the “cursing condition” even if it only makes up a small percentage of the population. Only one of the kids featured, Charlee, has the tic known as coprolalia that causes cursing and other inappropriate gestures. Throughout the entire episode, I was clearly able to see the very relatable and human features of each kid. More importantly, I could see myself. I saw my fun, geeky, and overly-prepared side through Kristin. I saw the way I threw myself into new worlds like art and music through Kaden’s own enthusiasm for playing the cello. I saw my love for dogs and need for control over the things in my life through Charlee.

The show ends with a screen that encourages people to look up more about Tourette’s on the Tourette’s Association page and reveals that 1 in 100 school-aged children have the disorder. Many of those cases – like mine – are not as severe as those shown on shows like “Raising Tourette’s” and can easily be under-diagnosed or completely dismissed as “not as bad,” so even that small note is an open door for less severe cases to be validated as well.

The only big problem I’ve seen so far with the show is due to production choices to presumably make the show more appealing. Towards the beginning of the episode, we see Kristin finding her classes, a normal thing for her to do. She acknowledges that she must prepare in advance for things that other kids don’t have to do, such as telling her teachers about her seat preferences and having an “escape plan” for when her tics and anxiety get out of control. Shortly after we’re introduced to Kristin, we see a shaky camera finding Kristin in the school hallway having a string of tics against the lockers. There is a pretty unnecessary addition of ominous music playing in the background to drum up the drama. While there are always “high stakes” situations that can happen with Tourette’s related to comorbidity – such as Kristin’s past tic and panic attack episodes – if the goal of the show is to bring positive awareness and understanding to Tourette’s, then they should have used the raw footage without the extra effects.

Nevertheless, the show is a big step to normalizing a condition that many people – even many medical professionals – have zero or a limited understanding of. It is a chance for more people to understand that we can live a happy and fruitful life and a step towards showing others like me that we don’t have to hide anymore.

Gretchen Gales is the executive editor of Quail Bell Magazine. She is the author of a children’s book, The Wall (DoDream Organization) and has been interviewed for her writing achievements at Dear English Major, Her Campus, and For Creative Girls. Gretchen’s written and visual works have appeared in The Huffington Post, Ms. Magazine, Bustle, and more.