An Interview with Beth O’Brien, Author of Catching Sight

Beth O’Brien’s creative nonfiction microchapbook, Catching Sight, was released on November 3, 2021 from Blanket Sea Press. It was selected as part of our inaugural Awareness & Advocacy microchapbook series.  We asked Beth to tell us more about the book, her journey as a writer, and how we can improve awareness and advocacy for visually impaired people.

What inspired you to write Catching Sight?

A few things, I think. I was doing my Creative Writing MA at the time, and it was the first time I was having my writing properly critiqued by other people. I got feedback about how I describe things without saying what they are. It was described as “interesting” but “not always very clear.”

I wasn’t aware of doing it, but I realized I was describing how I see, how I have to build up enough of an idea before I can make a good guess. At the same time, I was doing my best to find books that had visually impaired characters or authors. I found a few books with blind characters, but I realized that I’ve never read something where the main character has partial sight. So, this is a long-winded answer to say I wanted there to be better wide-ranging representation of visual impairments, and I was enjoying noticing how I described things in my writing. And then came Catching Sight.

How long have you been a writer, and what drew you to writing?

I have to give the cliché answer and say I’ve written since I was a child! I wrote through primary school and secondary school, sixth form and university. However, at some point I stopped telling people and only began sharing work in the latter half of my degree. And my other cliché answer to that second part of the question is that I just love it! I can either use it as escapism or as a way of getting some of what I am feeling out. And most of the time I find writing easier than talking.

Why did you choose a series of short essays for this microchapbook? Can you say more about the “audio described” sections of each piece?

I chose short essays because everything I wrote is nonfiction, but I wanted space to get creative with how I wrote about it. It felt like a good way to cover a variety of places and scenarios. As for the audio described parts, I wanted to highlight that most of what I do to navigate the world happens in all the guesses I make as I go along. No one sees that. I’ve had a few rude people snap at me before, asking me to hurry up, or telling me to learn to read when I’ve asked for help reading something. I think that’s why I wanted to show the gap between all the effort it takes and what the external view of that effort is.

Catching Sight is my first work of creative nonfiction. All my previous books have been poetry and all quite different from each other. However, Light Perception is a short pamphlet of poems that centers on the theme of disability, visual impairment, and dealing with how people react to one with a disability. But Light Perception is about how other people react, and Catching Sight is more focused on the lived experience of visual impairment. I think they sit nicely together.

I Left the Room Burning is a poetry collection that tells a fictional narrative about a woman who is left to raise her niece, a strange child that wants to disappear. And The Earth is a Bookcase is different again. It’s a pamphlet of poems inspired by the earth’s history, objects and people I learned about while working with a geology museum.

Blanket Sea is donating 10% of the press proceeds from your book to an advocacy organization. You chose Calibre Audio to be that organization. Can you talk a little about why this organization is important to you?

I love reading so, so much! As a child, audio tapes, then CDs, were my favorite things. Large print books are not widely available, and where they are, they come out much later and for a lot more money. Calibre Audio provide free audio books for anyone with a disability that affects their ability to read print books—whether that’s a visual impairment, dyslexia, or a chronic illness. Finding this site was great because I can’t just go to the library and pick up any book for free like a sighted person could if they wanted to. I think it’s really important that everyone has the opportunity to read (and yes, I am one of those people that still call listening to an audiobook “reading”). I was really lucky that my family bought me audiobooks when I was small and even ordered the ridiculously expensive and heavy large print books for me too once they were available. But not everyone has this privilege and Calibre is a wonderful resource to be aware of.

What do you wish that people understood better when it comes to visual impairment? Where could there be improvements in awareness, advocacy, etc.?

I think lots of people are unaware how broad a category visual impairment is. There is a whole spectrum between sighted and totally blind but that is not often spoken of. The rude strangers I’ve encountered have been rude because, “‘You don’t look blind.”

There is a huge misrepresentation of disability in the media, literature, film and TV, etc. I don’t think having a disability is tragic or means my life is inevitably less happy than someone else’s, but it is made difficult by society depicting it in this way. I want to see more nuanced, empowering representation of disability that isn’t a plot device, or cured by the end, or supplemented by a different superhuman ability. In summary, I think there needs to be an increased awareness of the lived experience of a disabled life as a whole human life. Disability is a part of my life, but so is the fact that I’m short and that I can’t sing. It wouldn’t be right to only talk about the fact that I have blonde hair—so it’s not enough to see disability as a sole defining characteristic.

In terms of improvements, I think a key thing to advocate for is designing and planning with disability in mind, rather than as an afterthought or not at all. As I write this, I’m psyching myself up to go food shopping. Reading packets, finding what I need, checking prices, allergy/nutritional information; all this means I walk around the shop with my phone magnifier to hand. It takes ages. A solution is to have QR codes that can be scanned in order to bring up a plain text version of packet’s information, but this is still rare practice. This is just one example, but there are day-to-day activities that are designed for sighted people only, still under the assumption that anyone who is not sighted would have someone with them to help. This assumption is exclusionary, the set-up is exclusionary, not the disability itself.

Who are some of your favorite authors?

This question always gets me! I have always loved Margaret Atwood—her fiction, poetry, and essays. Since the start of the pandemic, I’ve read every single Hercule Poirot book by Agatha Christie, and she is definitely one of my favorites, too. And my go-to comfort read is the entire Anne of Green Gables series by Lucy Maud Montgomery.

Tell us more about who you are. Hobbies, interests, fun facts? What would you like readers to know about you?

The most fun thing about me is my dog called Neville. My hobbies involve hanging out with him, mostly. I love reading/audiobooking. Pre-pandemic, I loved travelling, too! Unsurprisingly, writing is also a hobby of mine. I love musicals. I almost exclusively only watch children’s movies. When I struggle to remember any interesting facts about myself, I generally tell people about the time I met Dame Judi Dench and she wished me luck in my exams. This was about nine years ago, so I really should have something new to share by this point, but I don’t!

What are you hoping that readers will take away from your work?

I really hope it gives readers an (no pun intended) insight into how I see. I get asked to explain it a lot and it is such a difficult thing to articulate. I hope it can help people understand what it is like to navigate a world that expects everyone can see. And I also hope it can begin to show that there a whole host of visual experiences in between being sighted and totally blind. 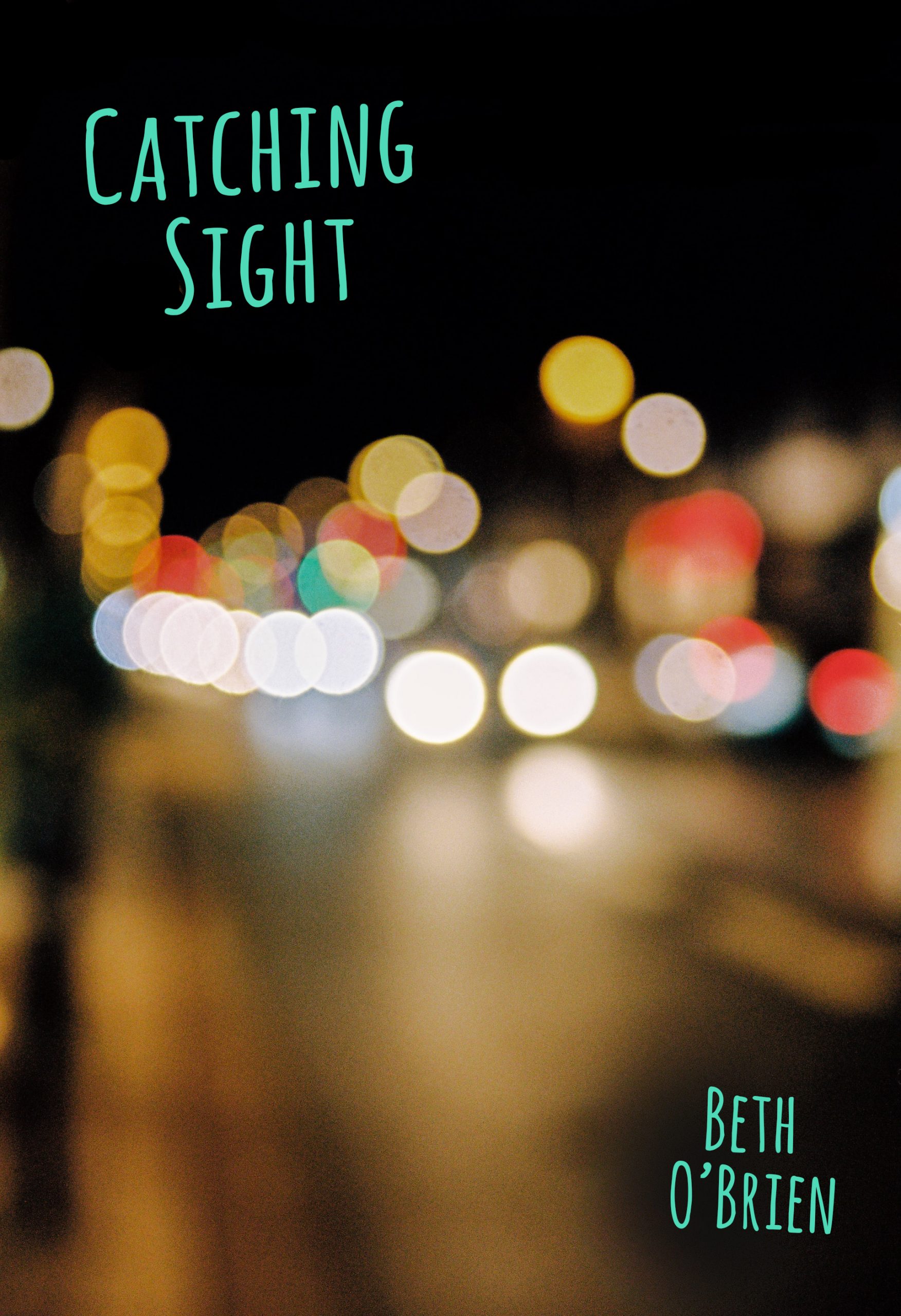 Find out more about Catching Sight and download your copy here. You can set your own price or get it for free. A portion of proceeds goes to Calibre Audio, an international charity that provides free audiobooks for people with any disability that affects their ability to read print books.