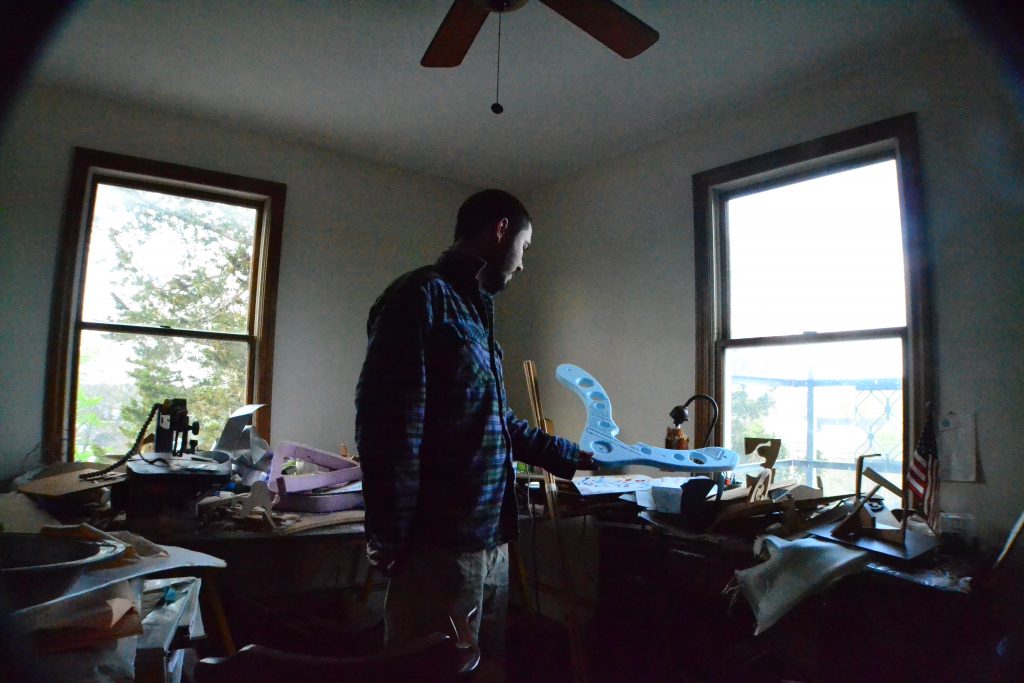 Figure 1. The artist Chris Cox Wild_Canary in his small, cluttered home studio, holding a foam scale 2 plug of the head of his design, “Windy.” 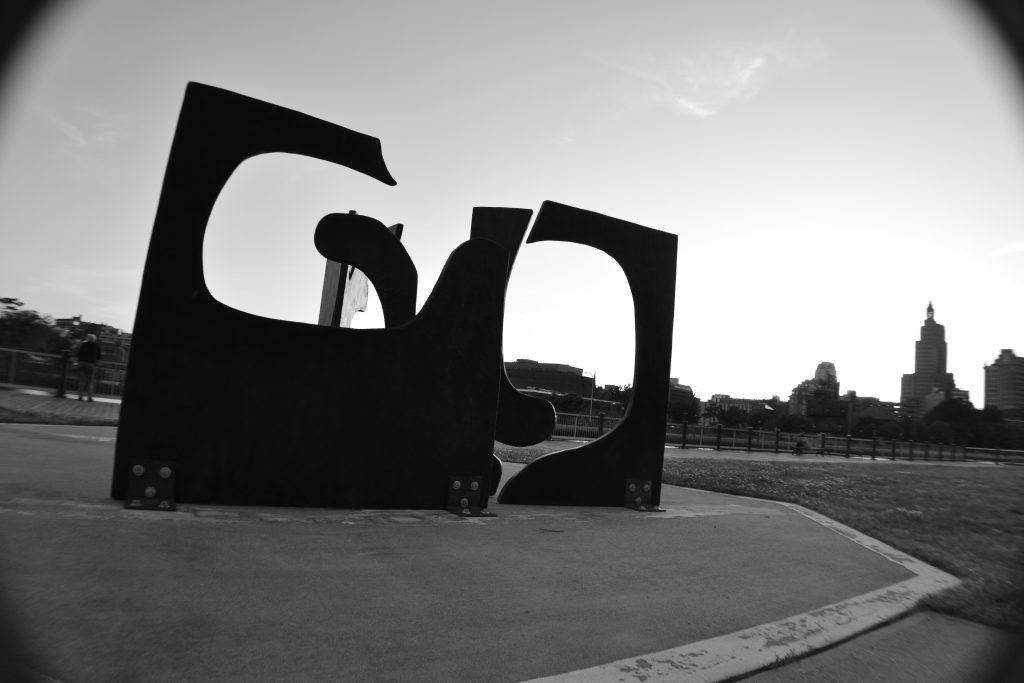 Figure 2. “POD” by Chris Cox Wild_Canary installed in Providence, RI, since May 2016. The artists premier sanction public large scale sculpture the sculpture stands 7′ tall and 12′ in diameter the cluster of six black, fiberglass, monolithic, abstractly shaped panels reveal whales within the negative space created by their silhouettes when considered in pairs. 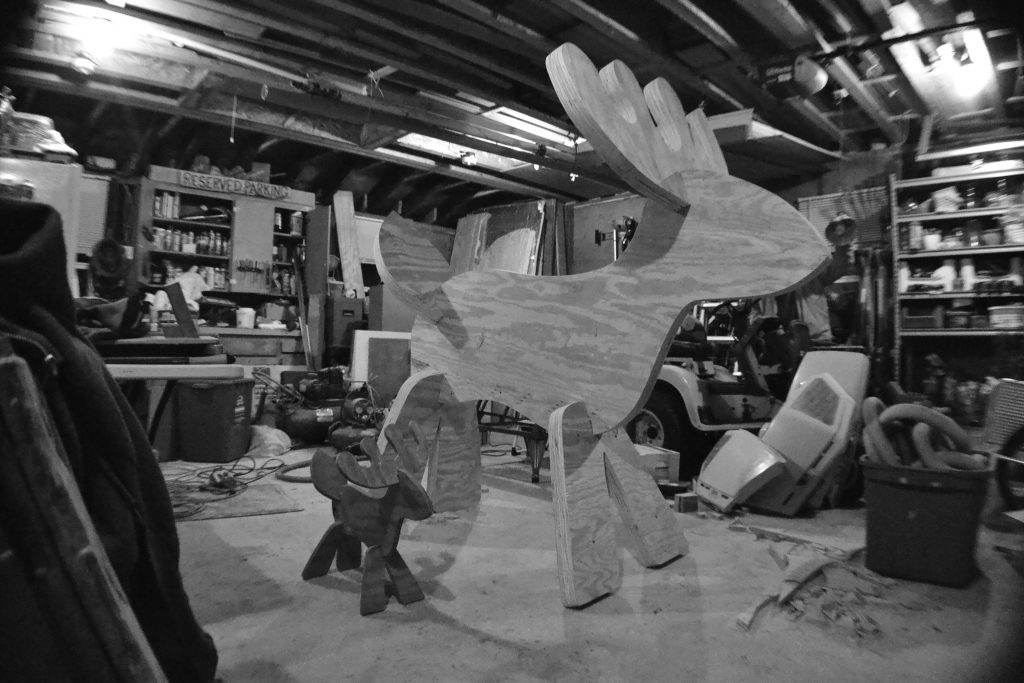 Figure 3. The sculptural design “Reindeer” being seen mid-fabrication to a scale of 3 based on the original maquette [seen next to its larger cousin]. This monumental abstraction of a wooden children’s Christmas toy stood 5’6″ tall 2′ wide and 6′ long and was installed in The Arcade in Providence, RI, for the 2017/2018 holiday season. 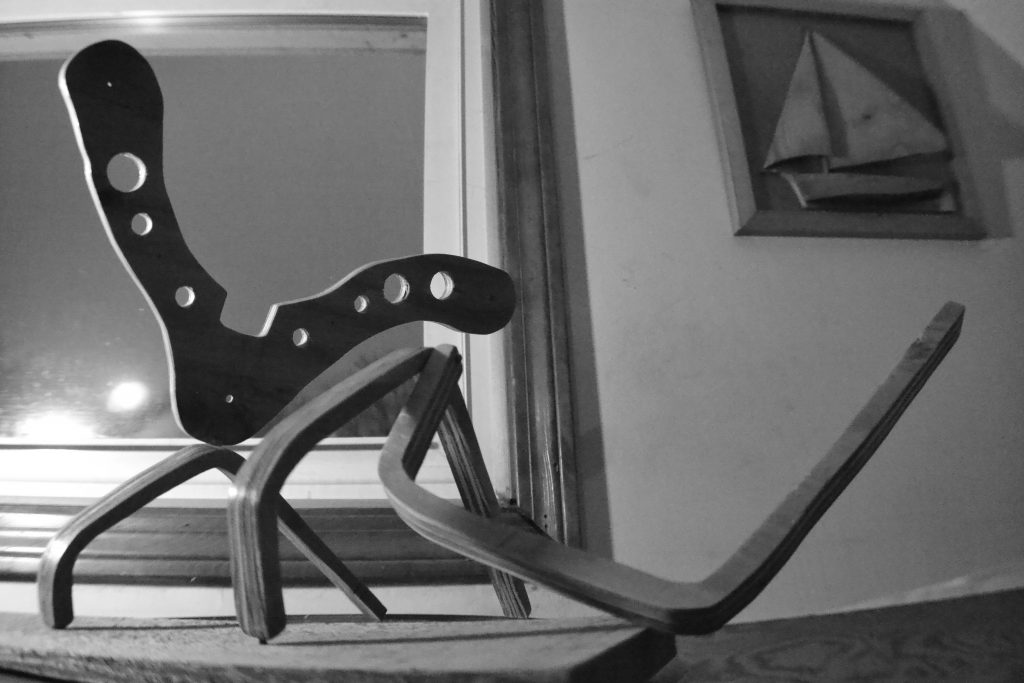 Figure 4. “The Windy Origin Edition AP” seen from behind. A minimal abstraction of a dog, this sculptural design is in the proccess of being fabricated 11′ tall, 12′ wide, and 17′ long, for temporary exhibit in the Rlying Horse Outdoor Sculpture Exhibition in South Hamilton, MA, August – November 2018. Seen in the wooden scale 1 Origin Edition format three angular hook shaped beams make up the legs and tail of the dog, while the dogs head is a curvy boomerang shaped panel, filled with holes of varying size that make the canine’s piercing gaze and give interest to the ears. Not only does the stance of this abstract depiction of my dog create a sense of motion, the sculpture itself can move as it is held together with an unbonded steel pin system, allowing for interaction and play with the piece by being able to swing the dogs tail and the legs in relation to one another, making the dog come alive with its ability to assume different stances.

Figure 5. “The River Crab Origin Edition AP,” defined by sharp, edgy, contemporary lines. A futuristic abstraction of a crab, this sculpture is of engineered interest, modular in design four wooden leg components contact the ground at their extremities and meet in the center at a carbon fiber junction plate which levitates above the ground plane, due to its connection to the legs by way of a steel pin system. Above this black junction plate seemingly floats a iridescently white, fiberglass plane that curves through axis, making the head of the crab.

Figure 6. “The POD Origin Edition AP” seen in the artists home with numerous other maquettes hanging on the wall behind it. The design created in this wooden format 12 times smaller than it stands in Providence, RI.

Having dropped out of the local community college in the first weeks of an artistic education due to mental illness, Chris Cox is artistically self-taught but trained in fabrication processes. Within the artist’s aesthetic, representative abstractions are visual metaphors of rules and lessons of life learned through the survival of schizophrenia. In Wild_Canary’s sculptural practice, all his designs start off as small maquettes, most commonly made of wood and fiberglass. Once a design has been created, he makes careful plans to recreate it on different scales. The artist viewing all the maquettes as future large-scale creations. Using the skills and experience gained through employment as a boat builder and custom fabricator, the artist is able to consider the large-scale fabrication of the design as he is creating its concept, preemptively solving problems. Considering the transportation and installation of the large scale artworks, Cox favors composite fabrication, thanks to its light weight and strength.

Although his artistic ambitions focus is on creating a legacy of large scale sculpture, Wild_Canary [Cox] is in the practice of creating smaller scale sculptures, most notably a collection of limited Origin Edition sculptures. The sculptures made in the Origin Edition format are hand crafted to be the closest recreation of how his designs were first born as concept maquettes. These Origin Editions are built in small limited batches, to scale one, by directly tracing off the designs’ original concept maquettes. Using the same simple materials, tools, and methods the concept maquettes were created with. Due to the nature of the materials and fabrication methods, each piece in a design’s Origin Edition, while crafted with great care to match the original concept maquette as closely as possible, is still subtly unique and one of a kind. Due to the Origin Edition’s format, the sculptures of the edition have a quality of historic importance and appeal, memorializing the moment of the design’s creation. Allowing the collector to peer back in time, as his career progresses, and remember his artistic legacy’s humble origins, for this reason, the sculptures in this format are called “Origin Editions.”

Chris Cox, known on Instagram and other social media as Wild_Canary, is a self-described sculptor surviving schizophrenia. Graduating from the International Yacht Restoration school with certifications in composite manufacturing and repair; later working as a custom fabricator of large scale sculptures at Amaral Custom Fabrications. Taking the skills learned through years of employment experience to create his own designs on a monumental level. Starting with mid scale sculptural graffiti installations and later making his premier sanctioned large scale public installation in 2016, entitled “POD,” still installed in Providence, RI, and standing 7′ tall and 12′ in diameter. For the 2017/2018 holiday season, the artist built and installed a 5’6″ tall, 2′ wide, and 6′ long sculpture entitled “Reindeer” inside The Arcade in Providence, RI. Cox has just executed a successful crowdfunding campaign to build a new sculpture, entitled “Windy,” a 11′ tall, 12′ wide, 17′ long abstraction of a happy dog, to be part of the Flying Horse Outdoor Sculpture Exhibition in South Hamilton, MA, this August. Being quoted as saying [he] “is so determined to create a legacy of large scale sculpture, it seems destined.”